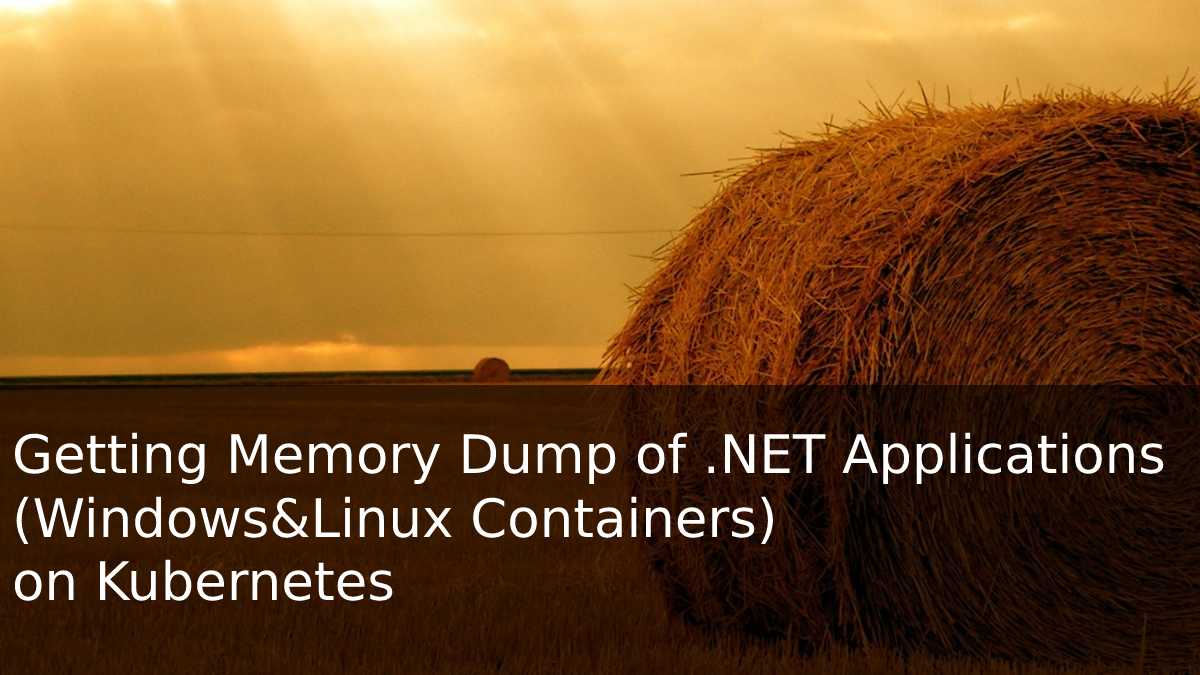 Getting Memory Dump of .NET Applications (Windows&Linux Containers) on Kubernetes

As we know, the best way to debug our applications that crash or hang due to memory leaks or unknown reasons is to analyze the dump files. At least that’s how my experience has been so far. As developers, at least we need to be able to analyze dumps to roughly understand why our applications are behaving unexpectedly. I have written different articles and made presentations on similar topics before.

Within the scope of this article, I will try to show how we can get dumps of our applications from both windows-based and linux-based containers running on a kubernetes environment and how we can analyze them on windows in the simplest way.

Let’s assume that an application we deployed on Azure Kubernetes Service crashes after a while due to a memory leak. In order to quickly investigate where this memory leak comes from, let’s assume that we decided to analyze the memory dump of the application. Apart from this scenario, our applications may hang after a certain period of time, or they may generate deadlocks, exceptions and crash due to unknown problems. In order to address such various problems, we can easily get information by taking the current memory dumps of the applications. In order to perform a quick example, I prepared a simple code block that will perform memory allocation as follows.

As we can see, I made an allocation operation during the mapping process of product list to the “ProductDTO” class. In the real world, it is possible to encounter memory leak problems for various reasons such as the following.

First, let’s take a look at how we can get the memory dump of our application running on a windows-based container. In order to containerize the x86 .NET Framework 4.8 application, I used the “Dockerfile” below.

Now let’s run the following commands first to take a look at the application we have deployed.

As we can see, the application is using around 579Mi of memory. We assume that usage increases over time and causes the application to crash. Now let’s go inside the pod and perform the memory dump operation before the application gets crashed. First of all, let’s run the following command to get into powershell session of the windows container.

In order to perform the memory dump operation, we will use the ProcDump tool. ProcDump is a command-line tool that allows us to easily get memory dumps. After getting into the powershell session of the pod, let’s download the ProcDump tool with the help of the following command, and then extract it.

Now we need the process ID of the application. For this, let’s run the “Get-Process” command and copy the ID information of the relevant process. Then, let’s go to the “procdump” folder and run the command below to get the dump.

The important point here is to specify which target platform the application is running on “x86” or “x64”. If the application is targeting to “x64“, it will be sufficient to add the “-64” parameter when getting the dump. The default is “x86“. 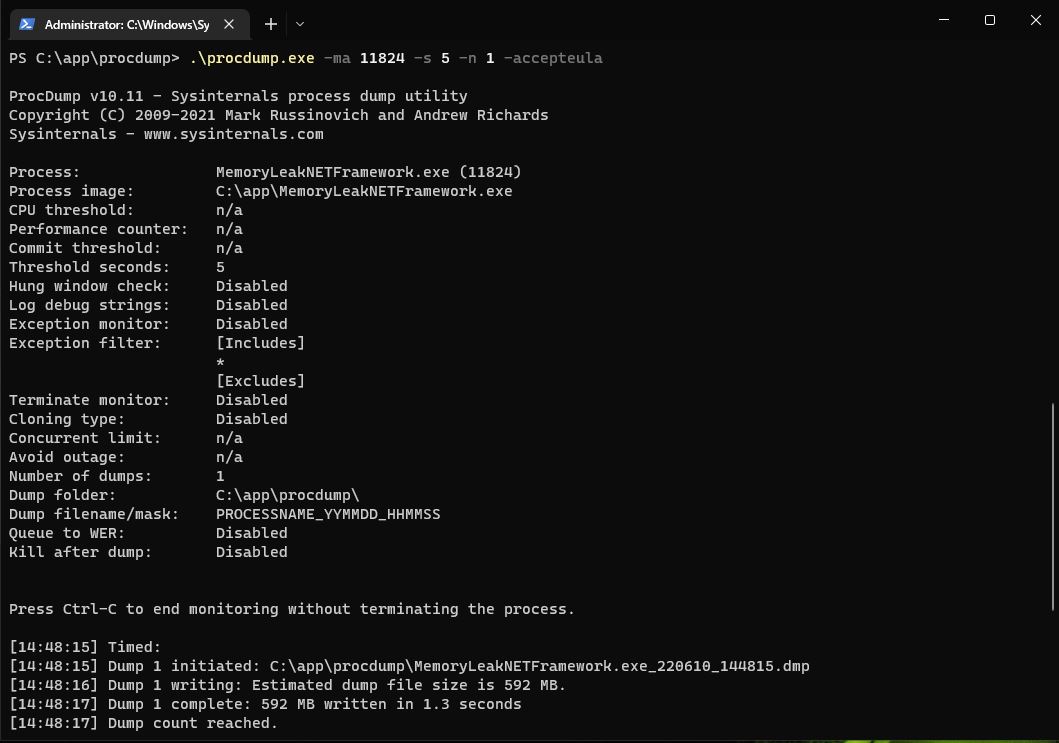 As we can see, the relevant dump file has been copied into “C:\procdump” directory.

Getting Dump with Linux Container

In order to perform an example with a linux container, I containerized the same code block with .NET 6 and deployed it on a linux-based nodepool. I used the following “Dockerfile“.

Now, let’s get into the shell session of the container to get a dump.

We have a few different options to perform dump operation in a linux container. This time I will use the .NET diagnostics CLI tools provided by Microsoft for .NET Core 3.1 and above. Within these tools there are two different tools that we can use called “dotnet-dump” and “dotnet-gcdump“. I will use the “dotnet-dump” tool because I want to be able to get benefit from SOS commands while performing dump analysis. First of all, let’s download the “dotnet-dump” tool into the container using the commands below. You can also check the different platform options here.

As we can see, the dump has been created with a size of “630MB“. Before copying it to our local environment, we need to compress the dump file in the same way. This time we can use the “gzip” tool inside the container.

After that we can copy the compressed dump file to our local environment as follows.

To be able to analyze dump files, there are different tool options such as WinDbg, Visual Studio, PerfView etc. Within the scope of this article, I will use WinDbg for the dump we got from windows container. If you want to prefer more visual tool, you can also consider other options. If you don’t have WinDbg tool, you can get it by following the “Debugging Tools for Windows” topic on this link. There is also a new version called WinDbg Preview. But I couldn’t run it as stable as the old version. That’s why I’m going with non-preview version. Since we have performed the dump operation with the x86 target platform for the windows container, let’s run the WinDbg (x86) version and follow the “File>Open Crash Dump” menu and select the dump file that we copied under the “C:\procdump” directory. 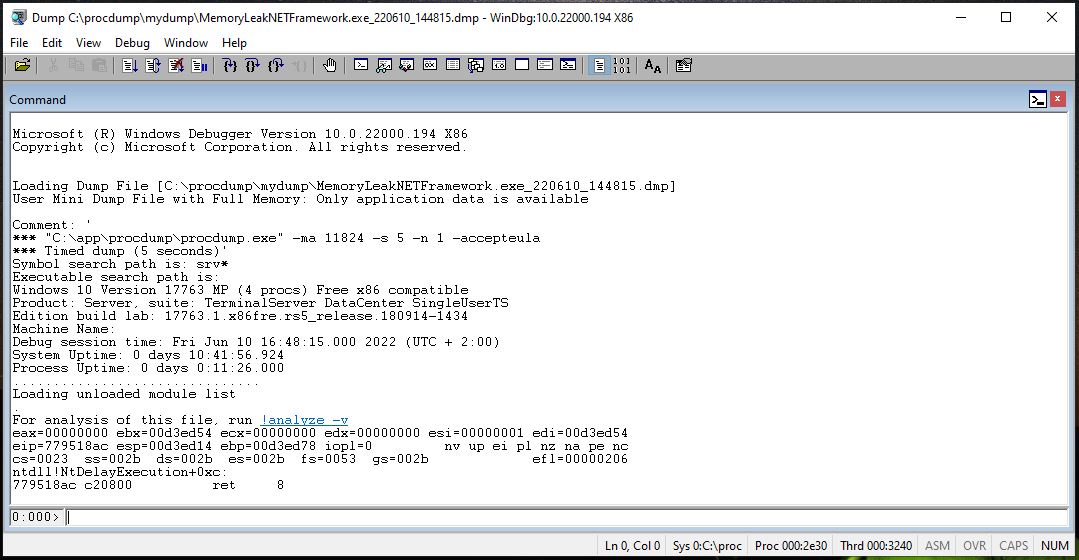 First of all, in order to use symbols in debugging operations (for callstack, variables), let’s add the paths of the “Microsoft Symbol” server and the pdb files of the application to the symbol search path as follows.

Now in order to debug the managed code, we need to install the SOS Debugging Extension into WinDbg. During this installation process, we should be careful that the version of the SOS extension we want to install and its bitness, should match with the CLR version and the bitness of the host machine that we got the dump. Fortunately, the appropriate SOS extension can be easily installed with the “!analyze –v” command. Normally we can use this command for exception analysis for crash dumps but we can also use this command to automatically load all required dlls via symbol search paths. 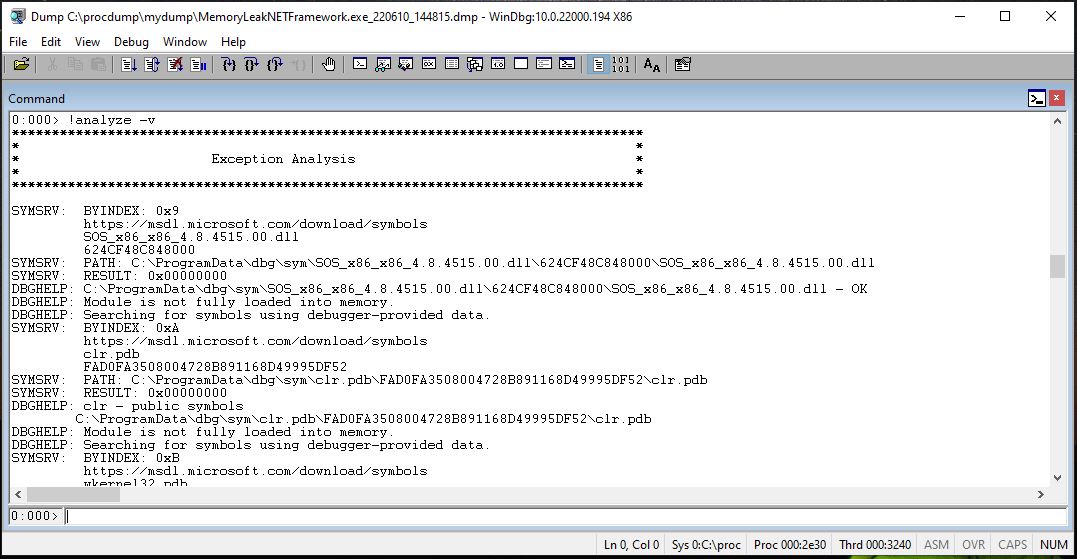 As we can see, the SOS extension is loaded into WinDbg with the version “x86_4.8.4515.00“. In addition, to see the other loaded extensions, we can run the “.chain” command. Now we can start analyzing the heap. First, let’s run the following command. 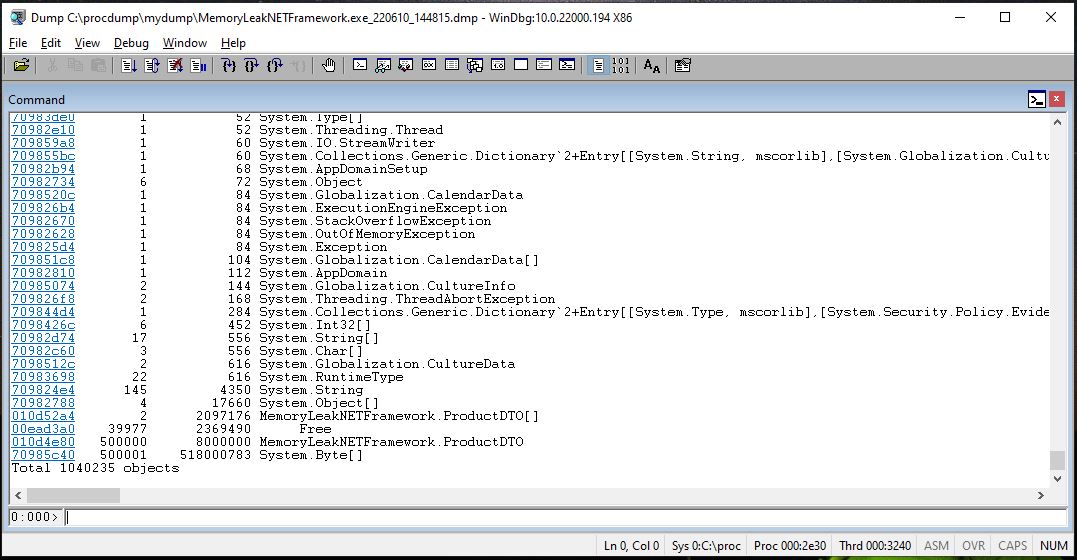 This command briefly shows us a statistical summary of the objects allocated in the managed heap and how much memory they use. In our scenario, our aim is to determine the point that caused the memory leak. So analyzing the heap, understanding what was happening at that time, will take us to the right point. If we take a look at the picture above, we can see that the “MemoryLeakNETFramework.ProductDTO” and “System.Byte[]” objects are registered “500000” times and allocates an average of “8MB” and “518MB“. Based on this information, we can say that the memory leak may be caused by these points. In short, while looking the memory leak source, we should be analyzing the objects according to whether they are being registered too much or the size they allocate. Now let’s take a look at the details of the “MemoryLeakNETFramework.ProductDTO” object. For this, we first need to access the method table of this object. So let’s copy the MT (Method Table) address in the first column of the “MemoryLeakNETFramework.ProductDTO” object and run the following command.

Then, by getting the memory address of any instance from the listed results, let’s access its details as follows. 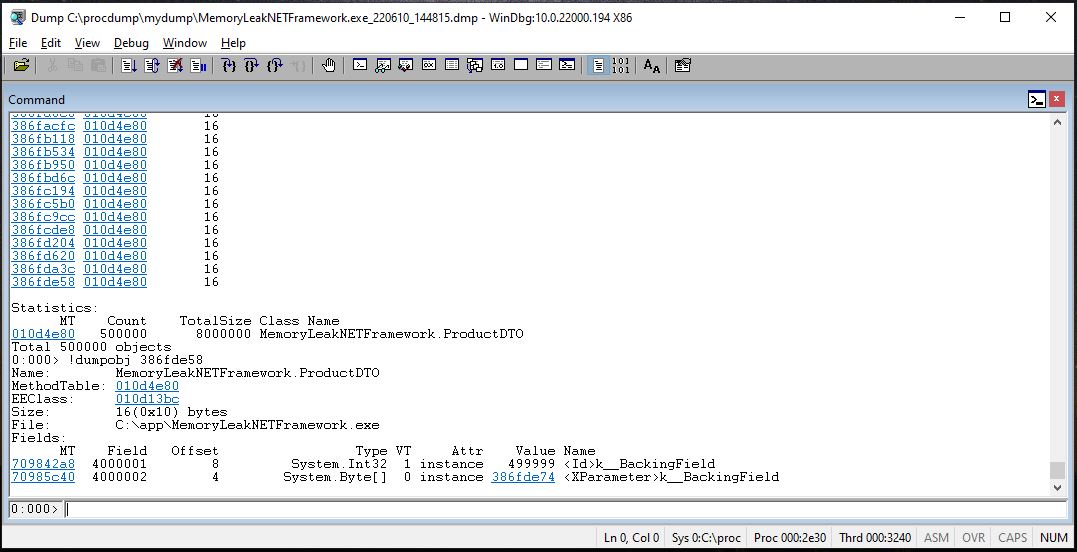 As we can see, by dumping the objects in the memory, we can access the values of the object at that time. If we want, we can also see the size of an object we want with the “!objsize” command. For example, in order to see the size of the “System.Byte[]” field in this object, let’s copy the reference address in the “Value” column and run the following command.

As we can see, the “System.Byte[]” field in the “MemoryLeakNETFramework.ProductDTO” object allocates “1036” bytes in the memory. By considering that “500000” times also registered in the heap, we can say that an average “518MB” allocation is happened due to these fields.

Then, by running the command below, we will access the interactive analysis terminal session of “dotnet-dump“.

Now, we can perform the analysis we want by using the same SOS commands (most of them) as we have done with WinDbg. For example, to analyze the heap again, let’s use the same following command.

As we can see, we can analyze the memory leak source in the same way by performing the same operations with the SOS commands. Some useful commands that I like to use: