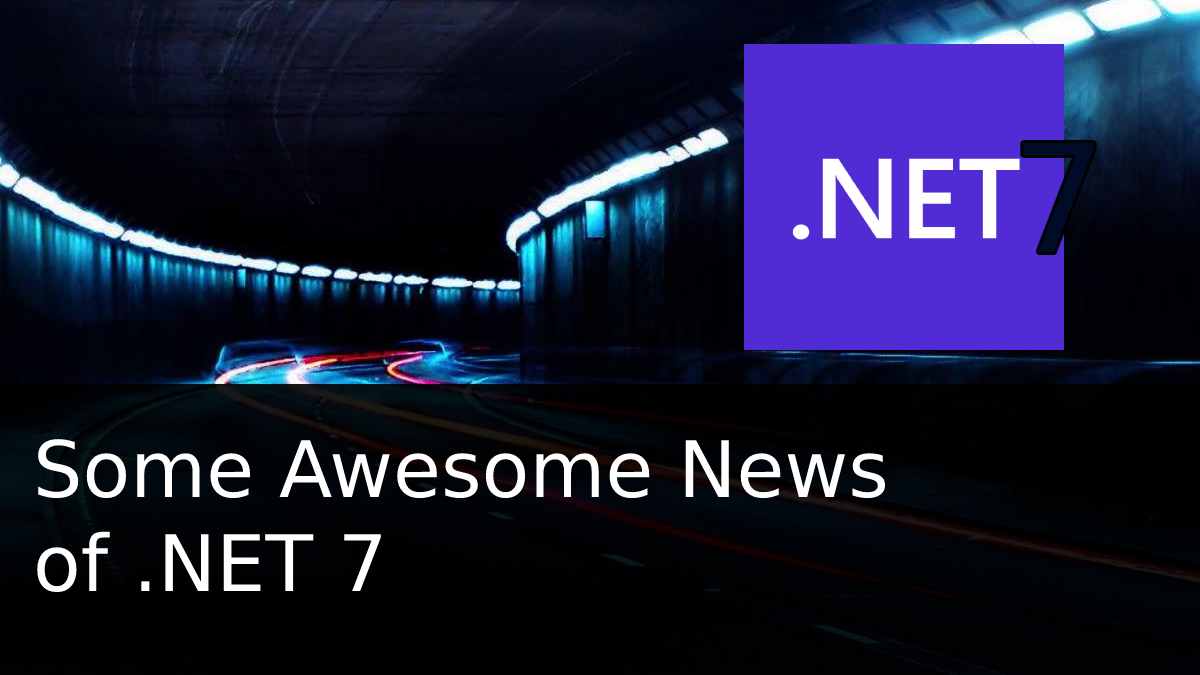 Some Awesome News of .NET 7

Published by Gökhan Gökalp on November 16, 2022

As we know, .NET Conf 2022 took place between 8-10 November. During the conf, exciting news and performance improvements around .NET 7 and C# 11 were mentioned. In this release, especially some topics got focused which support us to develop more “fast”, “lightweight” and easier “cloud-native” applications.

In this article, I will try to mention some news which I like.

NOTE: First, if you don’t have .NET 7 release yet, you can download it from here.

As we know, JIT is responsible for converting and managing MSIL code to native code at runtime. In order for our applications to work efficiently, it performs many different optimizations by taking into account the environment/process in the background. As we might imagine, such just-in-time performance optimizations are time-consuming operations due to their nature and have some tradeoffs. For example, when JIT does not make optimizations or not fully let’s say, the start-up time of the application may increase, but its functionality/throughput may decrease. As we know, in order to reduce such tradeoffs, JIT started to use Tiered Compilation by default since .NET Core 3. Thus, in order to achieve better performance optimization, JIT can perform hot-swap operations at runtime by recompiling the related methods more than once by looking at their usage statistics of them instead of compiling the methods only once.

With .NET 7, these tradeoffs, that JIT tried to avoid, have been tried to be completely handled by making use of the On-stack replacement technique in addition to other performance improvements on the JIT side. Thus, it is ensured that JIT can perform optimizations not only between method invocations but even while the relevant method is running.

Apart from these, there are also other great points that their performances have been improved such as Threading, Networking, Collections, LINQ and etc. In short, by changing the framework to .NET 7, we will be able to achieve a nice performance gain by default.

First, I would like to start with the Native Ahead-of-time (AOT) topic that excites me. As we know, the .NET team has been working on Native AOT for a while, and they had announced that they would get it from experimental status to mainline development within .NET 7. So with this release, Native AOT is now officially with us for console applications and class libraries.

Native AOT briefly generates the relevant code as “native” in compile-time instead of run-time. In short, when publishing the application, it compiles the relevant IL code to native code based on the specified runtime. Thus, Native AOT applications don’t need JIT while running. In other words, we can run our Native AOT applications in environments which don’t have .NET runtime. Of course, although this capability was provided to us under different features before, such as “Ready to Run“, this concept has evolved to a better point with Native AOT.

Some benefits of Native AOT;

Of course, there are also some limitations of Native AOT.

Although it has limitations, for now, I’m sure it will come to a good point in the future.

Let’s create a console application with the target framework .NET 7 in order to perform a quick test. Then, let’s use the simple piece of code that checks whether the given input is a palindrome or not.

Now, in order to compile this application natively, we need to add a property into the project file as below.

If we don’t want to add a property, we can also pass this parameter along with the publish command.

NOTE: If we compile the application on Ubuntu 20.04, it only works in same version or higher. In short, we need to pay attention to the Linux version we use to compile.

Now let’s use the below Dockerfile to test it.

If we take a look at the image points, we will use the Debian-based “dotnet/sdk:7.0” image to compile and “debian:bullseye-slim” image as runtime which doesn’t contain .NET runtime in it.

In addition, before publishing the application on the Linux machine, we also need to have the following relevant package.

As we can see, the application runs perfectly within the runtime which doesn’t have the .NET runtime in it.

I think Native AOT can be very useful, especially for serverless solutions. Considering that execution durations and start-up (cold-start” times are important, we can gain good benefits at these points by using Native AOT.

Within the scope of this release, I have mentioned some topics got focused on, which support us to develop more efficient and fast cloud-native applications. In this context, “Built-in Container Support” support was also one of them.

Although it seems like a very small feature, I found it quite handy for doing something fast. Especially if you don’t need a custom-made Dockerfile, we will be able to perform containerization operations with a parameter that we will specify while publishing our application.

For this process, we only need to add the following package via NuGet.

Then, when we perform the publish operation as follows, the container image will be created automatically.

I performed a test for a .NET 7 Web API project as follows.

As we can see the container has been successfully created.

As the base image, Debian-based Linux images are used by default. If we want to use a different distribution, we can do this by specifying the “ContainerBaseImage” property as follows.

Also “AssemblyName” is used as the container name by default and the “Version” property as the tag.

If we want, we can also change them as follows.

As a limitation, it only supports Linux-based containers for now.

As we know, the easiest method we can use for in-memory caching in ASP.NET Core is to use IMemoryCache.

With .NET 7, a new API also has been added to IMemoryCache for metrics support. Now with MemoryCacheStatistics, we will be able to access some information such as the estimated size of the cache and how the cache is getting used and etc.

In order to access these metrics information, we need to call the “GetCurrentStatistics()” method over IMemoryCache. Also, in order to track these metrics, we can either use EventCounters API and dotnet-counters tool or we can use the .NET metrics API and OpenTelemetry.

Also when adding IMemoryCache to the service collection, we need to set the “TrackStatistics” parameter to “true”.

Although it is not a big feature, I like the idea to manage versions of common NuGet packages used by multiple projects from a central location.

For this, we need to create a file called Directory.Packages.props in the root folder of the relevant solution and define the packages we want as follows.

Then, it will be sufficient to add the name of the relevant package as a reference in the project file we want.

With the “required” keyword which comes with C# 11, parameter null checking feature has become very useful.

As we can see above, when we use the “required” keyword, it will become mandatory to set the “MyRequiredParam” parameter while initializing the related class.

I have always had a special interest in the actor-model and I follow the Orleans Project closely in this regard. I have written a few different articles and a seminar about Orleans before.

If you want to check, you can reach out here.

As part of .NET 7, great performance improvements have also been done on the Orleans side. There are some improvements on the immutability side and there is a new serialization. Orleans was already a great and high-performance tool when I was working on it a couple of years ago. I had developed a few different applications by using it. Now I’m wondering how fast it is now.

For example, let’s suppose we have a schema like below.

The rest is up to our LINQ skills.

On the bulk operations side, two new methods have been introduced “ExecuteUpdateAsync” and “ExecuteDeleteAsync”. By using these methods, we will be able to perform bulk operations with LINQ.

It is very nice that they are brought into EF instead of using different EF extensions to perform such bulk operations.

Lastly, I would like to also mention the new “Rate-Limiting” middleware at the ASP.NET Core.

As we know, it is actually an important topic that the APIs, we have developed, have rate-limiting. Because it ensures that relevant API doesn’t get overwhelmed and its performance doesn’t decrease also it provides some kind of security mechanism against attacks such as DoS. Of course, especially if we are developing publicly accessible APIs.

It is a very simple-to-use middleware and comes with 4 different rate-limiting policies as “Fixed window”, “Sliding window”, “Token bucket” and “Concurrency”. We can also attach them at the endpoint level that we want.

For example, a “Fixed window” policy allows a maximum of “100” requests within “10” second window.

Then we can make it active or passive at any level we want.

Within the scope of this article, I have tried to mention some news and improvements that I like at first glance. This release also didn’t surprise me because within each release there are always great achievements, improvements and performance increases. In short, nice job!

If you have also different points that you like, I’m waiting for your comments.